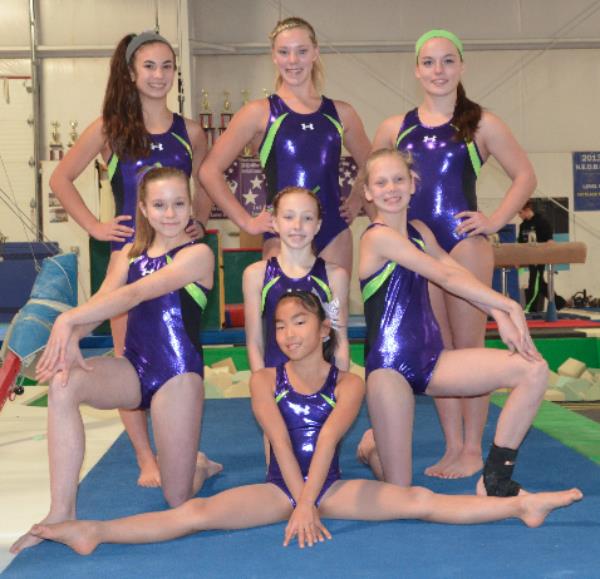 Emeth’s Optional C Team includes girls in gymnastics levels 7, 8, and 9. Although they vary greatly in age and years of experience, these girls share passion and commitment for their sport. The team is comprised of fifteen-year-old Brianne Shantery, fourteen-year-olds Maddie Prosek and Maggie Topalian, thirteen year olds Kayla Benjamin and Rachel DeCavitch, eleven-year-old Elaine Szep, and nine-year-old Shannon Chase.Most of the girls agree that floor is their favorite event.  They enjoy the tumbling aspect and the adrenaline that floor exercise brings.  “I really like floor because I like to perform,” adds Maggie.

Kayla and Brianne prefer beam because they feel that it challenges them mentally as well as physically.  Maddie is the lone gymnast that enjoys vault the most.  “I like vault because I can just whip it out,” reports Maddie.  “It goes quickly and there’s no time to stress.”

This past Monday, the girls participated in a practice meet where they received scores and verbal feedback from coaches and judges. They are very appreciative for a chance like this before their competition season begins. “Heather is so supportive of us,” says Kayla. “She wants us to keep improving.”

“She’s very good at correction,” adds Rachel. “We really like getting feedback from the judges too. It helps us know what to focus on between now and the first meet so that we can get better.”

These girls not only put in plenty of hours at Emeth, but are dedicated students as well. They often stay up late and get up early to study and to finish homework assignments. They all agree that they always make it a priority to use study halls effectively. “Gymnastics definitely teaches you that you need to use your time wisely,” reports Rachel. “It teaches you discipline.”

Even with the varied ages of these athletes, they all are friends who care about each other greatly. They laugh about their “roles” within the group and can see the positive character traits each teammate possesses. Kayla is deemed the encourager of the group because of her ability to give a great pep talk. Maggie is the one who goes out of her way to be kind to everyone around her. Elaine is best known for the character trait of perseverance. Shannon is the kid sister of the group. Brianne and Rachel share the title of “Beast” because, as Maddie puts it, “They are just that good.”

Maddie is the self-proclaimed “clutz” of the group.  “It’s fine if you write that because it’s totally true,” laughs Maddie.  “Seriously, I did a Yurchenko vault and totally forgot to hit the table.” Her teammates giggle, but are quick to insist that she is very talented and a leader on the team.

We wish the best of luck these hardworking and disciplined young women of character as they begin this new competition season.  They are already champions in our book!